Analysis of Manchester attack
Posted by DeltaMIke67 at 3:46 PM No comments:

Geert Wilders at AFA
Posted by DeltaMIke67 at 1:50 PM No comments:

Email ThisBlogThis!Share to TwitterShare to FacebookShare to Pinterest
Labels: Europe, jihad, PVV
Leftist's Only Concern When Jihadists Attack
Posted by DeltaMIke67 at 11:37 AM No comments:

Syrian Rebels and the Deep State


Syrian Rebels and the Deep STATE
Posted by DeltaMIke67 at 7:45 AM No comments:

Sanity for Sweden Update on Manchester


Sanity for Sweden Update on Manchester
Posted by DeltaMIke67 at 7:41 AM No comments:

Jihad in Manchester
Posted by DeltaMIke67 at 7:32 AM No comments:

Section 8 Vouchers: Tip of the Spear to Destroy White Civilization

Here is the process;

The Federal Government's myth of harmonious multi-racial and multi-cultural neighborhoods is just that! a myth! The only integrated neighborhood is from the time the first Section 8 people move in until the last white family moves out.  In 1970 Ferguson MO was 100% white. Now it is 90% Section 8 people.
Undeterred in it's War on "systemic racism" (that is, white families fleeing the Section 8 violence) there is a new campaign of "Furthering Affirmative Fair Housing" which will place massive Section 8 projects in every neighborhood in America.

This is, of course, why disarming America is so important to the Progressives. They can't have white racists defending themselves against the muggers , "pick out knock out" game, and home invaders and carjackers.

White people want to give Section 8 people "equal opportunity": that is, education, training, and opportunity to achieve a decent life. (And  are some that have done so and are criticized as having "gone white"!) But as a whole, Section 8 people are told by their leaders (like Obama and Eric Holder) that since this is such a prosperous society, why shouldn't they just be given their "fair share"?  And further, if they are NOT given their fair share, they are going to take it! 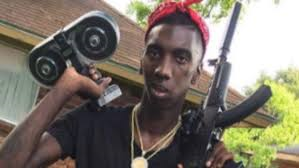 And so the Destruction Continues