The traditional American values that have made America exceptional is the concept of “inalienable rights granted by our creator”, something scorned by the Progressives (another name for Marxist-Leninists who have changed their name hoping to shed responsibility for the hundred million bodies of the 20th Century).

The critical tipping point will be Obama-Care. The Progressives must re-elect Obama such that Obama-Care can take root. Then, every individual in America will be dependent on the Federal Government. No more limited government of the people, by the people, and for the people: but a people subject to and DEPENDENT upon an ever-growing dominance from Washington DC.

American exceptionalism would not survive, but be extinguished by the heavy hand of taxation and  regulation by a Nanny State who “knows best how you should live your life”.

Jefferson said our form of Government only works for a religious and moral people. This is precisely why the Progressives are working  diligently to destroy the family, moral values and the Church in our society. The Progressives want to pave the way for the “New Socialist citizen”.

They don’t want strong families raising educated children who are self-reliant critical thinkers. They want the utterly dependent semi-literate welfare single moms living in the Projects, scraping by from one welfare check to the next. They want the gangs of fatherless young men who can be harnessed into the armed  “Obama Civil Defense Corps” who will look to Obama as their father-figure in the same way the Soviet Young Pioneers looked to their “Uncle Joe” in the 1950’s.

Naturally, all Socialist Utopias have to be “purified of undesirables”. The purges, mass arrests and death camps will certainly follow.

Another thing: the wealth the Progressives take for granted will disappear. Poverty and starvation will spread across the land, turning America into a third world country: that is, a “Socialist Paradise”. It will be the Party hacks who live in excess in the confiscated big houses surrounded by a sea of misery.

One big difference: anyone reporting on this hypocrisy will be labeled a “social deviationist” and disappear.

Is it “Racism” to have questions about Islamic Doctrine?

For one thing, Islam is a “belief” attribute, NOT a biological one. Thus, an accusation of “racism” is meaningless name calling. It is also part of the tactical responses devised by the Muslim Brotherhood and its front groups to deflect questions about Islamic Doctrine.

If I say, “Let us look at the more vicious Suras Q9 and Q5.” I am immediately drowned out by howls of “Racist! Bigot! Islamophobe! Hater!”  What the Muslim Brotherhood is counting on at this point is for everyone to start arguing whether or not I am all these things, and hoping that we never will get back to Q9 and Q5.

The premise of the “counter-jihad” movement is for everyone to read and understand the harsh reality of Islamic Doctrine for themselves. People need to recognize the butchery and enslavement of non-Muslims called for in the Qur’an and Sunna.

Counter-Jihad and the Norway Carnage

The Left is trying to blame the carnage in Norway on the Counter-Jihadists “stirring up hatred and Islamophobia”, CAUSING the mass-murder! But this doesn’t follow when one thinks it through.

For one thing, Muslims were NOT the targets of the attack. For another, let us define “Islamophobia”. The word sounds like “homophobia”, implying that concern for Islam is irrational bigotry. But Islam is a vicious totalitarian political ideology that enslaves women, has killed 270 million people and would roll mankind back to the Seventh Century. Mankind has EXCELLENT reasons to be concerned about Islam!  Nothing irrational here!

But drilling deeper into the Theology, “Islamophobia” is a word for their concept of “Fitna”, the tumult and disturbance caused by non-Muslims resisting the Islamization process!  But resisting the destruction of our society by Islam is what we need to do if we wish to preserve our liberties and our prosperity.

The foundational plank of the Counter-Jihad  Movement is for Western Society to become familiar with the reality of Islamic Doctrine.  Once aware of the enslavement and butchery of non-Muslims called for by Qur’anic Doctrine, our hope is that the survival instinct of Western Civilization will kick in, and the political will to resist Islamization will develop.

Right now, by ignorantly accommodating Muslim “religious” demands, we are in fact surrendering our liberties and our culture slice by slice.  Each demand eliminates our culture and insinuates theirs. I can provide dozens of examples.

Resisting Muslim “Religious” demands, such as for prayer rooms, foot washing stations, halal foods in public schools, is not religious discrimination, as the Muslims imply. Islamic Doctrine allows for Muslims living in non-Muslim countries to pray later, wash later, or whatever they need to do. Allah is kind and merciful.

The demands are, in fact,a subtle strategy of forcing us to submit to the Shari’ah Law, bit by bit.  Awakening the public to this Islamic strategy is not “stirring up hatred” against Muslims: it is defending our culture. Period!

Our enemies are sweeping us from the battlefield in the Middle East. We are abandoning our allies in Israel. Our economy is in shambles. The alliance of Marxists and Islamic Jihadists in the Federal government are doing irreparable harm to our nation. Yet the media gives them a free pass, owing to their “advocacy Journalism” that aids and abets this destruction of our liberties and prosperity.

It simply cannot go on. the nation’s preoccupation with frivolity and entertainment, the taking for granted the wealth, comfort, security, adequate food for the children, will come to a destructive and. There are just too many enemies out there salivating to butcher, burn and blow up everything we hold dear. And our response? “ Oh, what is the spiritual significance of Harry Potter?”

The Attack on the American Family

Have you ever stopped to consider the following:

The reason is, the Left wants to build their “socialist man” to inhabit the “New World Order” they have in mind. They don’t want healthy kids with a sense of values getting an education, being critical thinkers, having happy stable families as young adults! They want something else!

They want semi-educated welfare moms inhabiting the projects, living from one welfare check to the next! They want gangs of fatherless violent young men who can be enlisted into the “Civilian Defense Corps” to become their “enforcers”.

The Progressives consider the destruction of the black family as “mission accomplished”. Now, they are starting on the whites and are  right on track!

The Democrats and their allies in the media are making the case that it would be “irresponsible” to NOT raise the debt ceiling. In other words, kick the can down the road and continue with business as usual. This would only defer this same confrontation to a later time when the debt ceiling would have to be raised again.

If the debt ceiling is NOT raised, we can count on the Democrats to hurt the largest number of people and utilize their advocate journalists to blame Republicans. Can’t you see the “grandma in the street without her social security check” interviews?

The RIGHT THING TO DO is cut spending! We don’t have a revenue problem, but a spending problem. The Hard Left design to destroy this country through its economy is the underlying motive of all we see. It is the “fundamental Change” that the President promised. If we wish to survive we have no choice but to thwart the Hard Left designs!

To the secularists and Christian Scientists, Satan does not exist. Thus, he has a field day with these people! He likes nothing better than when people say “Satan is unreal and the problem is you!”

Here’s the way it works (on a man): you’re on a church committee or at a business in the presence of other women. Out of the blue, you find yourself attracted to a woman on the committee, at work or whatever. If it turns out to be a “two way street” and this woman reciprocates, you find yourself in a full blown extra-marital affair that destroys two families: hers and yours! Satan and his minions are shrieking with laughter and “high-fiving” one another over their success !

The key here is to understand that the first thoughts of attraction are NOT YOUR OWN, but planted by Satan!  This happens throughout our society at every walk of life: from the VP of Focus on the Family caught screwing one of the other staff members, or John Edwards having a child with a staff member of his Election campaign! Christian Pastors and organizations are especially targeted! The aforementioned Focus on the Family debacle made national headlines! The World loves to smear the Church and the body of Christ and delights in discovering “hypocrisy”.

But it’s a mistake to think such people are “weak” and “fallen”: they have been picked off!

The key to defending against such intrusions is to recognize them immediately for what they are and from whom they have come. Unmask these thoughts and they are 90% disarmed. Daily prayer and meditation, invoking the Holy Spirit to reveal Satan’s designs on you and your family and friends is a must!

The right course of action to recover the economy has seldom been so obvious! Yet the Progressive ideological impediment to recovery glares to the forefront! Let us examine them!

A “Mumbai-style” Jihadist attack in the US would be:

But how would an Obama Administration respond?  My guess would be to try to pass “emergency gun legislation” to confiscate every firearm from the hands of the public!

The Progressive “Alice in Wonderland” reasoning is “removing guns from the hands of the public makes the public safer” (as if this would deprive arms and explosives from reaching the hands of Jihadists, who could be supplied by Pakistani diplomatic pouch!) 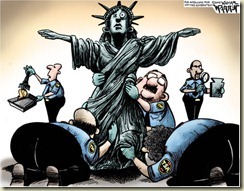 “Carlos the Jackal” once said that “only a coalition of Islamists and Marxists can take down America.” A prerequisite is to disarm the American public at all costs! They know they can’t prevail if there are a hundred million Americans with firearms!

The reality is, that the more the citizenry is armed, the safer it becomes! If the Mumbai shooters encountered return fire at every turn, the death toll would have been far less. Remember the Jihad attack in a Utah shopping mall that was thwarted by an off-duty policeman who happened to be there and was able to take down the shooter.

In short, the Constitution and the rest of all our liberties primarily depend on the Second Amendment!

The President spoke today,and implied that the failure to raise the debt ceiling was causing uncertainty with small businesses, and that is why they are not hiring. But this isn’t true!

What is causing uncertainty and killing jobs and employment growth are as follows:

I doubt if the President even believes what he said: more than likely, he is hoping that over time, the economy will somehow fix itself.