The Democrats consider us "unstable" or "sore losers" since we're not "moving on" and accepting their voter fraud.  After all, they've been doing it for 150 years, so they are "entitled" to ignore the theoretical voting laws!  How unsportsmanlike to actually fight for an honest election!

So when they "find" 300,000 ballots overnight in Pennsylvania, just enough to reverse the "game day" vote, and 100% were for Biden, you shouldn't ask any questions!

So when voter turnout in key precincts is 125%, again, no questions allowed!

And when they deny poll watchers and observers access to the counting rooms,  that's supposed to be OK too!

If we are going to prevent America from being more of a Banana Republic than it already is, honest men need to fight the corruption to the full extent of the law!

Prayer for the Nation and Western Civilization

O Lord, we give up to you all our anxieties and desperation. We know we are your children and rest in your hands. Are we not like the few who worshipped you who were in Sodom and Gomorrah?

Response
Posted by DeltaMIke67 at 5:29 AM No comments:

To my KofC and American Legion leadership:

Here we have an existential threat to the land  and to our church that we love.  The KofC 4th Degree is supposed to exemplify Patriotism and defense of the church. Yet the leadership is hiding under their beds, not wanting to be "controversial", waiting for the return of beer and football.

The Preamble of the American Legion alludes to defending Americanism, yet the National Magazine is filled with left wing deconstructionist stories about "racism in the Armed Forces" (written by non-veteran leftie youngsters) and the apparent determination to be irrelevant.  In the face of armed revolution that threatens the destruction of our Nation, all the American Legion can find time to do is  sell us insurance and WWII memorabilia, or whine for more Veterans Benefits to the state and local governments.

Does "irrelevance" ring any bells with anyone but me?

As the M*rxist takedown of the US  kicks into high gear, we must fight! We will take casualties!   We will take the wounded and the stiffs out of the line and continue the battle.  If we win, we will have time to honor and mourn our glorious dead.

But if we stop to cry and grieve now, we will  weaken the line, lose heart and lose the battle.  And if we lose, we will join the dead, forgotten, in mass graves.

So: no weeping, no whining, fight as if there were no tomorrow.  Because if we lose, there will be no tomorrow for us: more than likely only a 6 day train ride, in open box cars without food or water,  to a FEMA industrial grade d*ath camp, reserved for the 60 million "enemies of the State".

Can I Help YOU?

I thought Biden did better than I expected. He seemed to have the energy to hold his own.   But the thing to remember:  the Democrat candidate is a "Bait and Switch"!

You vote for the harmless kindly dotard Joe Biden but get the vicious Communist Kamala Harris!  I'm not sure how they would ease Biden out of the Oval Office, or if they would even bother. But without a doubt Comrade Kamala would be the acting President! Her reference to the "Harris Administration" was no slip: that's the plan! 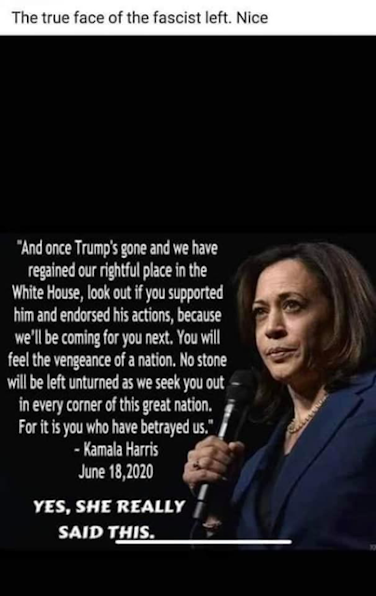